Hannah, a writer and good friend of mine, once mentioned to me the memories of her mother’s independent afternoons spent painting. Knowing her family was large and homeschooled, I was intrigued to imagine such a vision. I also sensed Hannah’s fondness of these memories and felt I had to know more! For those that homeschool now, hearing memories from a child’s perspective can be a soothing balm to the constant evaluation and re-evaluation that goes on in one’s mind. 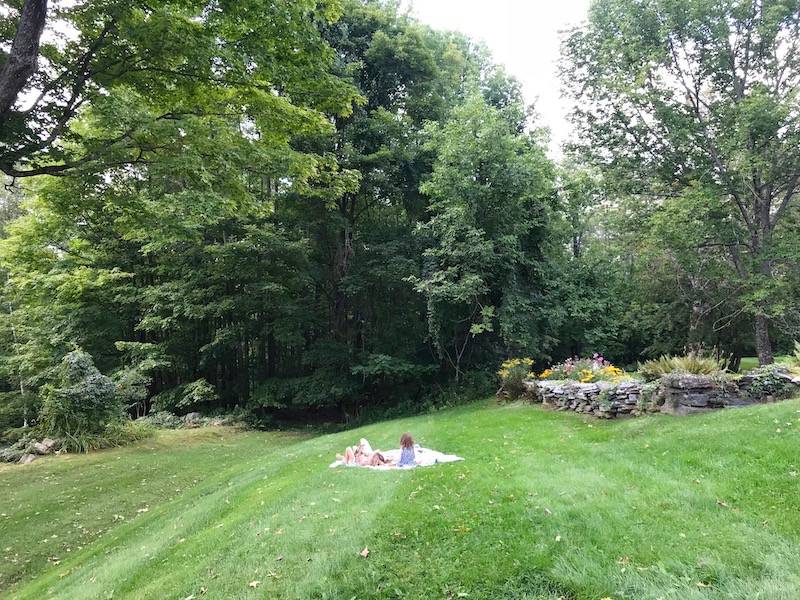 When I was seven my family moved from a New England town with sidewalks and shops to one in the woods. We rented an old white parsonage–although my father was an engineer and not a minister–with a grassy backyard edged by a tumbled stone wall, sugar maples, and a dark row of hemlock trees. The house had enough bedrooms–at last–for all five of us children and a small room at the top of the stairs, with a window looking over the back lawn, that was my mother’s art studio.

The studio was big enough for a wide desk and had shelves where my mother kept her calligraphy pens, boxes of pen nibs, jars of ink, tubes of watercolor pigment, paper of all different textures.

Sometime after our move, my mother arranged for mother’s helpers to come watch the older children in the afternoons while the baby slept and she disappeared into her studio.

These girls were probably only ten or eleven, but they seemed so much older than I was. They taught us which things we could eat in the woods–wintergreen berries and clover flowers–and when to look for wild strawberries in the grass. They answered my questions about whether or not bears might come into our yard. One of them was taken with the idea of going caving and we spent hours in the shade of the hemlock trees, where the branches drew over us like a tent, pretending we were deep underground.

I don’t know how many afternoons a week the mother’s helpers came, but I felt a kind of pride even then that my mother, the artist, was up in her studio where she wrote in calligraphy and painted. Just like I was proud that she was a runner, that she ran in the mornings before I woke up.

When my parents met in college my mother says her plan was to be an artist who lived in New York City and to maybe to compete in the Olympics. She was studying art then and on an athletic scholarship in field hockey and indoor and outdoor track. Then she and my father decided instead to have a lot of children. They decided to homeschool us–even though no one had heard of that at the time.

The story of what she originally planned to be was part of our family legend. Never a story told with bitterness or regret, but one that we, her children, told authoritatively to our friends. We always knew my mother could have been quite happy doing something other than raising a band of children. She’s the kind of woman who invents community wherever she goes, who comes out of a convenience store (we used to wait in the car) beaming from whatever interaction she had inside. We were lucky we got her.