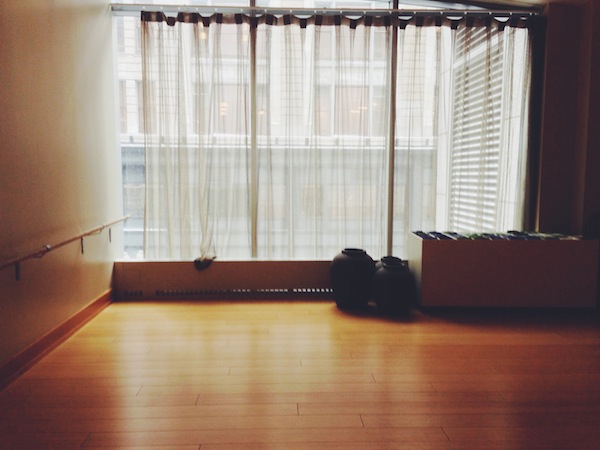 I’m experimenting with something new: having two hours to myself, once or twice a week. For Christmas my older brother bought me a two month membership to a nearby gym that has childcare. Um, woah. That was a surprise.

The girls are simultaneously in an almost freakish sweet spot where they are perfectly happy in the care of strangers. Freakish to me, after the scenes I’ve been through with Lux at a younger age, that now I wander out with nary a whimper as the door closes behind me.

I confess that I often think, “I’ll just go sit in the steam room and then take a hot shower for an hour. No one has to know that I never actually exercised.”

The gym is blissful spot really. There’s some kind of waterfall behind the front desk so the first thing you hear when you get off the elevator is the sound of falling water. There are walls of freshly folded white towels. A cafe with all the trendy smoothie add-ons I don’t want in my pantry, but I do want to try: maca root, spirulina, bee pollen. It’s thrumming with Boston’s beautiful people steadily getting more perfect. The first day I walked through the primary gym room to find myself a treadmill, I thought “Jeez you all look great. I think you’re doing fine. Treat yourself to a matinee!”

Yesterday I settled onto a wood bench in the gloriously hot and dry sauna. After a moment I noticed that the woman across from me was doing some kind of calisthenics on her bench. She had the look of someone who was older, but her skin wasn’t showing it. Neither was her hair. This must be her secret, I thought. Calisthenics in the sauna. I bet she’s here everyday.

I admire that kind of self care, but this gift is coming at a time when I’ve almost totally dropped that from my register. I’m more likely to have a strong drink in the evenings than take a soothing bath. More likely to collapse on the couch with my phone than do some stretches on the floor. I get everyone ready in the morning and then I dart around for five minutes getting myself ready. I feed everyone well, but then snack on coffee for myself.

Something that I thought about during my yoga class yesterday is the moment when people grab something to cover themselves, to get a little warmer. There’s something so nice about that movement. When a girl drapes a scarf around her head and snuggles into it. When a blanket gets piled on. Watching a man put on his hat and settle it just so, tugging it down over his ears. When you shrug a sweater over your head and continue on, feeling a little bolstered and braver.

It’s self care at its most immediate. I need a little something extra right now—ah, a blanket. Ok, now I’m ready.

Totally coincidentally I undressed in the locker room next to the exact same 70-something-year-old woman that I had sat next to in yoga. We were both very naked, and discussing the amount of clothing we were about to put on. “The difference between us and them,” she said, referring to the southern states in the midst of a deep freeze, “is that we have the clothes for this.” I looked over my clumsy pile of daily gear–the pilling mittens with useful flaps that fold back, a thin yet warm knit hat, a broad scarf, the long jacket already tipped with salt stains–and felt proud. I’m not doing all the nice things for myself that I could be, like most of the people here. But I’m doing a few of them.