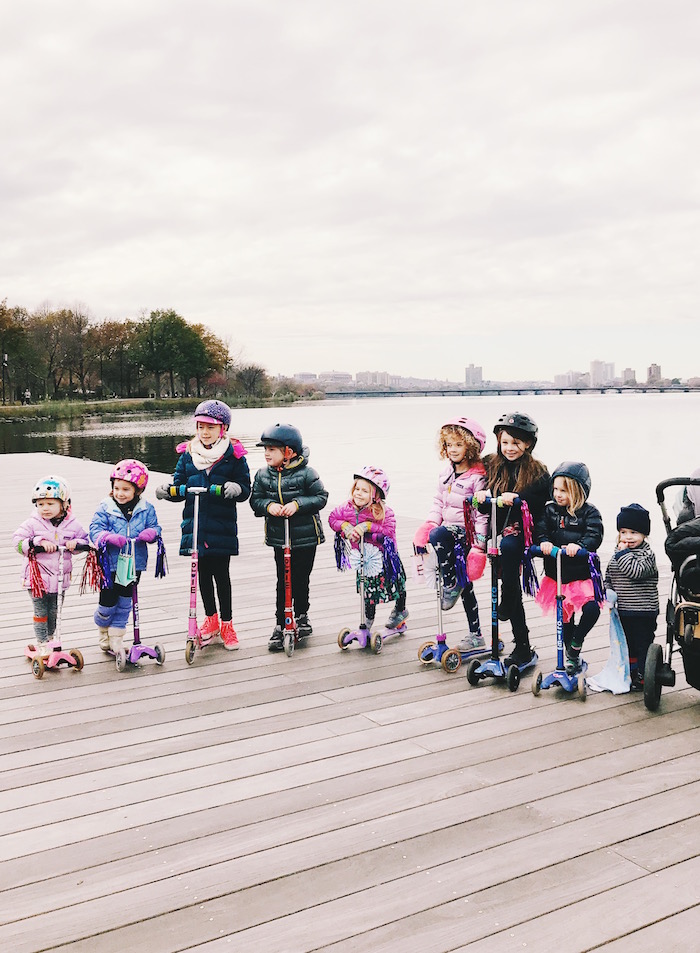 A reader recently wrote me to ask about socialization when staying at home with a three or four year old. Such good questions here that we all tumble through. I thought I would share her email and my response.

Hi Rachael,
I have been reading your blog for a long time now (do all of the emails you get from strangers begin this way? Probably.) Anyway, it’s true. Since before Joan was born!
I’m now lucky to have two girls of my own. 2.5yrs and 6 months, so we are still in the trenches of learning how to handle two kids. I’m writing because I’m considering pulling my 2.5 year old out of preschool next year. She has been going to the sweetest montessori program two days a week. It’s been good for her – and good for me to have some time with just the baby. Despite its benefits, T. is clearly exhausted by school. We will likely be moving before the next school year and the only Montessori program in our new town is 5 mornings. I’m not sure she can hack 5 days and I’m not sure I can do the get-to-school scramble 5 days in a row, especially bc Dad travels 5 days a week for work. Okay, enough about our predicament. I’m wondering how you handled socialization for your girls when they stayed with you at ages 3 and 4. Did you opt into specific programs? Hit the library story time circuit? Or just plan play dates? Do I need to join a gymnastics class or something?

Another lurking question re schooling is: do you think the socialization is important for the kid? Or, mostly for mom? Having been home for almost three years, I fully know my needs for socialization and structure but I’m not sure my daughter’s mirror that. Because you’ve been on the other side of 3 years old twice now, I’m wondering: did you see this increased need for socialization?  How did your child staying home blend with the choice of the majority of the families? I guess the bottom line is (and isn’t it always?): if I make this choice primarily for my sanity (not rushing to school 5 days a week), will my daughter be left wanting?

I completely relate to your question, and absolute affirm your suspicion that five mornings a week will be too much! The needs of staying home with a 3 or 4 year old is up to the child. The fact that you’re writing at all tells me that your oldest is probably quite social, i.e. if you haven’t made any movements towards going out she might ask, “What are we going to do this morning?” In this situation, which was the case with my eldest as well, I tried to plan things 2-3 mornings a week. Typically I planned these things a week in advance, or over the weekend. 2-3 mornings give you that every-other morning off to stay at home, which is important.

Regarding the concept of/concerns about of socialization as a whole: when Lux was entering kindergarten at age five her new teacher expressed concern that she would have trouble adapting to the school environment. Not because of anything the teacher had observed in her, but because it was assumed if you haven’t been adapting slowly over time, then it’s going to take awhile to fit in. But she adapted immediately, listening with delight to instruction and thriving in the structured environment–both a welcome change for her from home life! She had never had another adult as an instructor, so it was a novelty and she was intent on listening carefully. She’d never had the chance to observe peers for extended periods of time, so she came home and recited all the odd things other children did.

She returned to me in the afternoon exhausted (cranky, snippy), unaccustomed to mingling with her young sisters, and eager for individualized attention. (This compared to what we had before. Our life was outburst free before school-fatigue set in.) “That’s so crazy!” her teacher remarked when I commented on this, “She’s an absolute dream at school.”

Therein lies the great school conundrum. Group-think, traveling as a pack, chatting and running with a gang of children is really fun. But every day for eight hours, it is completely exhausting.

Joan attends a local Classical Conversation group that meets once a week (as they all do). (Find one here by typing in your zip code.) She loves her teacher, her presentation time, and adores her group of seven buddies, as well as her recess time with older kids. She is tired out by the end (1pm) and enjoys the rest of the week at home, asking about her class only one or two days before it begins again. Everything in moderation is the great boon of home life. Had I know about this program when Lux was four, I know that she would have loved it as well.

I remember being at the playground with Lux when she was four and a local day care would show up. She told me she was envious of all the kids running around together. I was sensitive to that longing, but I also don’t think she realized how joyfully she giggled and plotted with her little sister all day, the long uninterrupted moments she spent paging through books on my bed, the stories she quietly told herself as she drew for far longer than “art time” would have allowed.

In my extremely limited experience I have never observed a child who did better because of earlier adaption. Personally I follow research that suggests the more children are one-on-one with adults, the better they do in social settings with their peers. The more they are only with each other, the more unstructured (and natural to their age–selfishly) they behave. (One of the best books written on this idea is from 1989, Dorothy & Raymond Moore’s Better Late Than Early, but you can read some of their ideas in this article as well.)

However, I have seen children who parents are not comfortable with discipline of any kind. They are unwilling to say no to their child and do not follow through with any of their voiced threats/consequences. They are eager for the relief and enforcement of other adults in their child’s lives. In this circumstance, I completely understand that a school/structured environment would return a better behaved child to the home.

Moving to a new town and opting-out of preschool means you will have to be a little aggressive with grabbing folks’ phone number initially. And just shrugging it off when lots of people you meet either work or does not have their child with them in the morning. I promise that there are other people choosing their own adventure education-wise, but it might take some digging to find them. In a new town, an organized class is not a bad idea because you’d have that initial organized chance to meet other moms. However, I find most programmatic things (even library story times) do not offer a chance to get to know other moms. You end up spending the time interacting with/managing your child and their expectations rather than chatting. But a library story time was the place I first met several of my best local mom friends when Lux was little. That was because I aggressively chatted up two interesting women with babies the exact same age, then I suggested we go out for coffee afterwards, and finally one of them said we should trade numbers. We never went to the library together again, instead we met at each other’s houses for the next year.

Ideas of things I would plan, as you feel the need:

-The library on consistently the same morning, probably not the morning of story time (when it is often flooded with people). If I met anyone there, I would say “see you here next week?” or I would exchange numbers, and text the day before, “Planning on the library tomorrow, will you guys be making it out?”

-A standing playdate. These are fantastic because they don’t require planning ahead of time. Ideally you create a loop and host every 3-4 week, but trading off works too. Making coffee and muffins for friends or trying out a craft on a lark is much more fun than by yourself. My friend Noelle–who, it must be said, lives in California–met up at a park with a friend she met via Instagram. They called it Preschool Breakfast. She says…

We would meet once a week at a park (actually the coffee place next to the park first). We would both pack snacks for the kids to share, which they loooved and of course always wanted the other kid’s snack first. Azusa and I would talk about cooking. We would always ask the kids what they had for breakfast that morning, but they almost never remembered. They ended up at different schools now but we still hang out once a week!

-Babysitters: I have always felt best when I’ve had at least one three-hour babysitting session a week. Not for errands, but for adult consciousness things; anything restful and mindful. Reading magazine at the bookstore. Calling an old friend. Writing at the library. Sitting in my car on Pinterest. Take some of the money saved from preschool and put it toward this endeavor. I like coming back just before nap time/quiet time. Emphasize to the sitter that she is not entertaining them but is playing with them, following their lead, stepping back one they are happy enough by themselves. That way when you come home T. won’t act like she just got dropped off after a morning at the fairgrounds. When you hire this weekly sitter, make it clear you will need one or two tasks done during the time as well–all the dishes, tidying the office, vacuuming the living room. This is what you would ask of yourself, so it’s not too much to ask. But it is easiest asked upfront.

-Errand-Coffee-Walk In the words of 600sqfeetandababy, “My cup of coffee is one of the only things I do for myself each day and therefore I love to treat it very seriously.” (I can’t find where she said this, but I love this quote and have remembered as best I can.) If you have a weekly mom-scheduled jotted down, even something of the groceries-coffee-walk variety becomes a “thing” full of the rewards of accomplishment and fresh air.

Please feel free to respond to my admittedly extremely-limited experience with thoughts in the comments. I have some other emails I’m going to dig up and post here as well. If you have a question too, feel free to email me at rachael.ringenberg@gmail.com. x

7 thoughts on “letter from a reader”