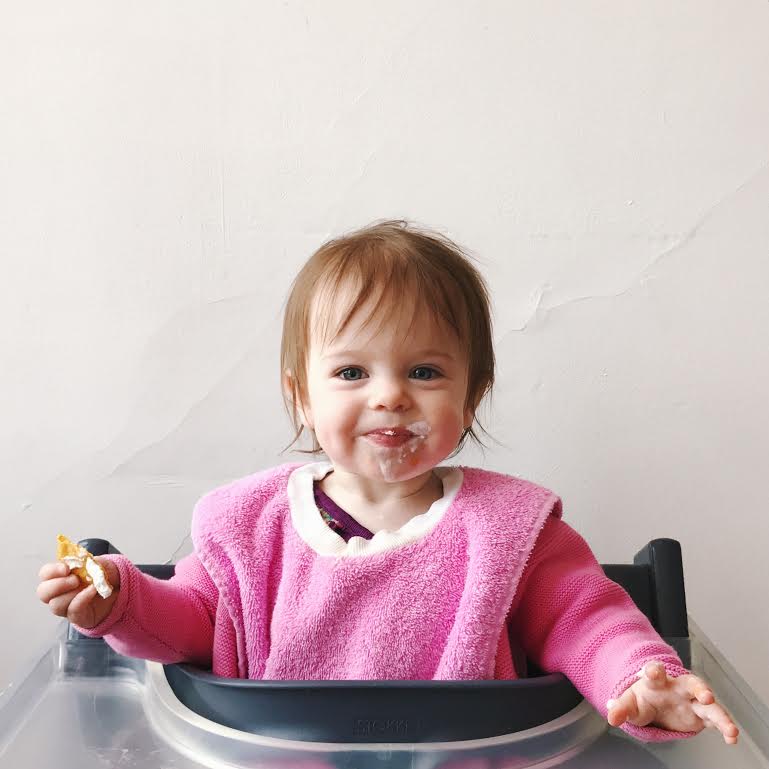 a now, a few notes on Alma before another month slips away:

She still has eczema, especially around her ankles, patches of dinosaur skin that blister red and itch. It’s hard for me to know how much it bothers her. After moisturizing her skin (primarily I use compounds with coconut oil), I pull on socks and then booties, and tuck her pants into those. If I leave her skin bare, she itches it and scratches herself fiercely. But if the skin is covered, she doesn’t seem to notice it.

I miss seeing her bare legs and feet though. Clothes are a poor varnish for babies’ perfect bodies.

Because of the eczema and the potential of food allergies causing it, I’ve delayed weaning her. I’m happy to be nursing a bit longer than I did with the other two, though I think we’ll be done by the end of the month. I sense that she’s weaning herself, and feeling very cuddly as a result, often pulling herself onto my lap to sit, or crawling merrily behind me while I pace (as it must seem to her) the apartment.

She plays by herself the most of all three of them, often crawling into the girls’ room on her own and slowly destroying it. I lean into the doorway and find her settled on Joan’s pillow, her tongue-tap “ta, ta” as she tosses, one by one, a stack of cards over the edge of the bed. She turns to glance at me, grinning. We smile at each other for awhile and then go on with our duties.

She now gets frustrated when she isn’t given something she wants the moment she wants it–like being allowed to climb on the table and pinch cereal pillows out of the girls’ bowls, milk dripping down her arm. She sees my iphone as a possession which we share; she likes to coo at softly while holding it with both hands. Fortunately I have two other children so I know that the cellphone ownership-mimicry gradually fades and it is not an early indicator that you have developed a creepy tech-obsessed enfant terrible.

She is very happy when imitating a pretentious stage reader. She comes upon books left on the floor, and settles down cross legged to examine them. She grabs the edges of the pages and flips at random through the book for several minutes, never looking up, all the while running a loud, low-pitched tone, like an aged generator that happens to drool. She often does this while I’m reading aloud too, perching next to me and nearly over-droning my voice while I read to the girls. If she finds me reading to myself, she grabs the edge of the book and flips through it as if looking for a page number, slowly pulling it away from me. She thinks it is hilarious if I try to read aloud to her in my lap, giggling loudly and then demanding the book for herself.

The girls are extremely indulgent of her and hate to hear her cry. If Lux is sitting next to her in the car, she’ll drape her hair over Alma’s fingers to yank on, sing to her, dig through her backpack to find distractions. Lux’s teacher told me she is often raising her hand and asking “if babies can come” to any school event being announced. Joan will cry ALMA! and dart around the house looking for a toy to give her.

I do find myself often stalling on a request of Joan’s because Alma needs something, which I regret. I’d like to streamline my actions and the household revolutions more cleanly. Right now I’m often feeding one, cleaning up after the other, in endless cycle.

There’s no denying that a thirteen (to eighteen!) month old is a chaotic element for a household. You never know where they are or how they might be attempting to poison themselves. They require constant vigilance, and if I could find a robot to follow her around and undo her every action, that would be fantastic. That said, we are absolutely obsessed with her presence in our lives.