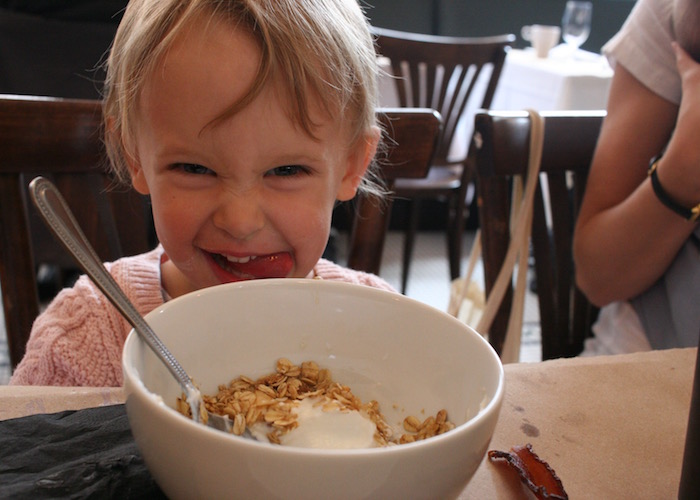 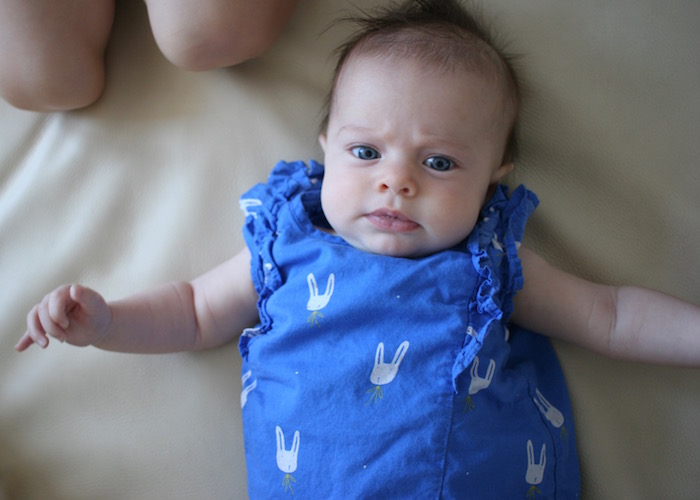 Lux: taking a photo of pair of doors after I told her they were two of my favorites in the neighborhood.

Joan: her granola came with four blackberries. ‘I need more blackberries,’ she repeated for the rest of the meal. Don’t we all, Joan.

I had two food goals for March: 1/ get the girls to eat muesli or “cold oatmeal” for breakfast. I spend an enormous amount of my weekly budget on food, and yet I loathe putting money into cereal manufacturer’s coffers. The girl love oatmeal, but the ten-minute-prep-and-cool time is usually too long for us to wait. So muesli would eliminate processed grain cereal—saving money and cutting sugar. And it would mean breakfast would be ready in bowls, in the fridge, first thing every morning.

2/ Get the girls to eat beans and rice for several meals a week.

Both goals get an A for Attempted. Joan took to the muesli, aside from the one day I optimistically added raisins the night before and they bloomed into foreign things (in her mind). Lux did not take to it, now matter how charmingly I set out little bowls of brown sugar and raisins to accompany it, and she skipped breakfast all together on those days.

I made an enormous pot of rice and beans but made the mistake of following a recipe that asked for Chinese chili spice. It was too much for them, obviously, and it was just me that ended up eating rice and beans for about ten meals.

I’ll do a simple batch next and serve for lunch–a time when my meal prep is needlessly harried.

Both goals are coming with me into April.