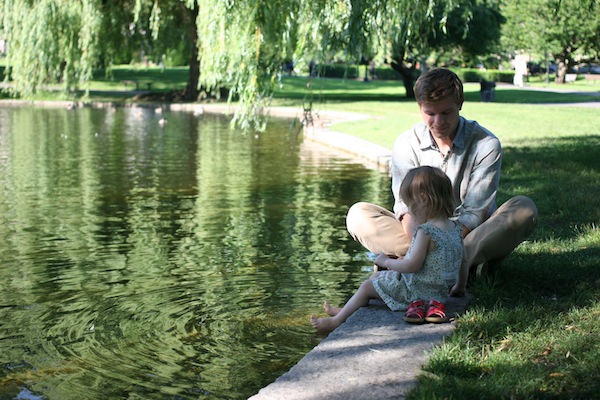 This weekend was a nesting weekend. I had written up a list of all the things I wanted to get done, some of them enormous–ORGANIZE CLOSET, FINAL LIST OF NAMES, LABEL FOR DOORBELL– and some of them rather arbitrary–CANCEL CREDIT CARD, WASH CARSEAT COVER–though every last thing seemed equally important as its kin in my mind. Joe had a mental list of things he’d been hoping to get done in the next six months that he decided to accomplish immediately as well. We went to the South Bay shopping center, one of those awful Sim City big box outposts with a shared parking lot that you believe never should have been developed, but then when you frequent it once a year they feel like the answer to everything. Wood for pantry shelves, a little metal hook for the bathroom door, hangers for Lux’s closest, storage bins for baby clothing, a new electric toothbrush, nursing bras, a pair of shorts for Lux, lanolin…. One of those shocking lists that bridges three stores and you know you need everything on the list, nothing is whimsical, and yet somehow is there so much of it?

Halfway through our Saturday epic I shared a hot dog and a box of Pizza Hut breadsticks at the Target Cafe with Lux. Lux asked for a second hot dog and then decided she wanted to be carried to the counter while I bought it for her. I refused, and we had that moment, the one you’ve all seen: a crazily pregnant woman watching her toddler dramatically throw herself to the ground in front of a clear cabinet of fake-dough pretzels and weep as if she’s never had a good day in her young life. SOS, I texted to Joe. But we got through it and the breadsticks tasted exactly as I remembered them from childhood (did they trademark that spice mix in 1990?) and now I don’t have to eat at Pizza Hut, or (pray to God) Target, for another four years.

An involuntarily primal love was tapped as Joe bustled alongside me on Saturday. It was the mess before the organization, each of us creating small piles of chaos only systemized to our eyes, dragging things from one end of the apartment to the other. He sorted through an entire shelf of excess cleaning supplies inherited from the previous tenants (there is nothing I like less than dealing with cleaning supplies as it is my personal opinion that none of them should exist, they are all toxic and harmful to our environment), built a hanging rod for Lux’s closet, outfitted and built a pantry into a closet, reorgnized our kitchen in some magical way that made it appear 10x bigger, and carted two loads of laundry down and back from the laundry mat. Nesting is the hormone you don’t ask for, and when it arrives, it’s a thirst that feels so relieving when quenched. Seriously, it was like a 7UP ad over here.

The Lux Clothes Archive is now housed in eight plastic bins, each labeled with a small index card. I think of these bins as I think my Gmail Inbox: it gradually grows with no foreseeable end and no cause for examination. Have you ever seen an ad for Gmail? Very clever—it shows how much gigabyte storage you get for free, and as you stare at the screen contemplating a new email account, the number keeps growing before your eyes. In my mind I can see 10 neatly stacked plastic bins, then 16 bins, all somehow lining the upper shelves in her room. This baby will use everything Lux did (though unfairly marked from the beginning with the avocado stains of her ancestors–the clearest visual of the phrase generational sin as I’ve ever gotten), and then–will there be another baby after that, using them again? And as that happens, Lux will grow and there will be more sizes, as yet unlabeled and unbought. I am more befuddled by this steadily accruing clothing collection than I am at our actual family size.