I make this almond cake for women who’ve just had babies. The food you eat after you’ve had a baby tastes like food after you’ve been sick for a long time and eaten dry toast with nubs of butter for a week. I remember being in the hospital with Lux and they would bring me these rather sad McMuffin-style egg sandwiches and I thought they were amazing. After we came home someone brought me marinated steak, arugula salad, and orzo salad with sun dried tomatoes and I almost wept with happiness.

But even though a new mom might have low standards for what you bring her I think if you bring her the good stuff, it will really count. For life. I’ll probably be calling in favors, five years from now, and say, “remember when I brought you that almond cake? Ok, now will you please come pick me up on the side of a highway?”

I know I’m not grandly delusional too, because then I get the Thank You Notes that exclusively gush about the almond cake (“no need for a thank you note!” I proclaim. New moms don’t listen to nobody.).

But of course, you can bring this to anyone who needs a little extra affection, a paper-wrapped golden reminder on their kitchen counter that the world hearts them. It ages really nicely (I think the one photographed here was a week old), but it probably won’t age because it doesn’t take people long to figure out that it tastes good with eggs for breakfast, salad for lunch, or just after dinner. It also ships nicely. I once packed up a box for my brother in Florida and it arrived perfectly intact, only to be devoured within the day. 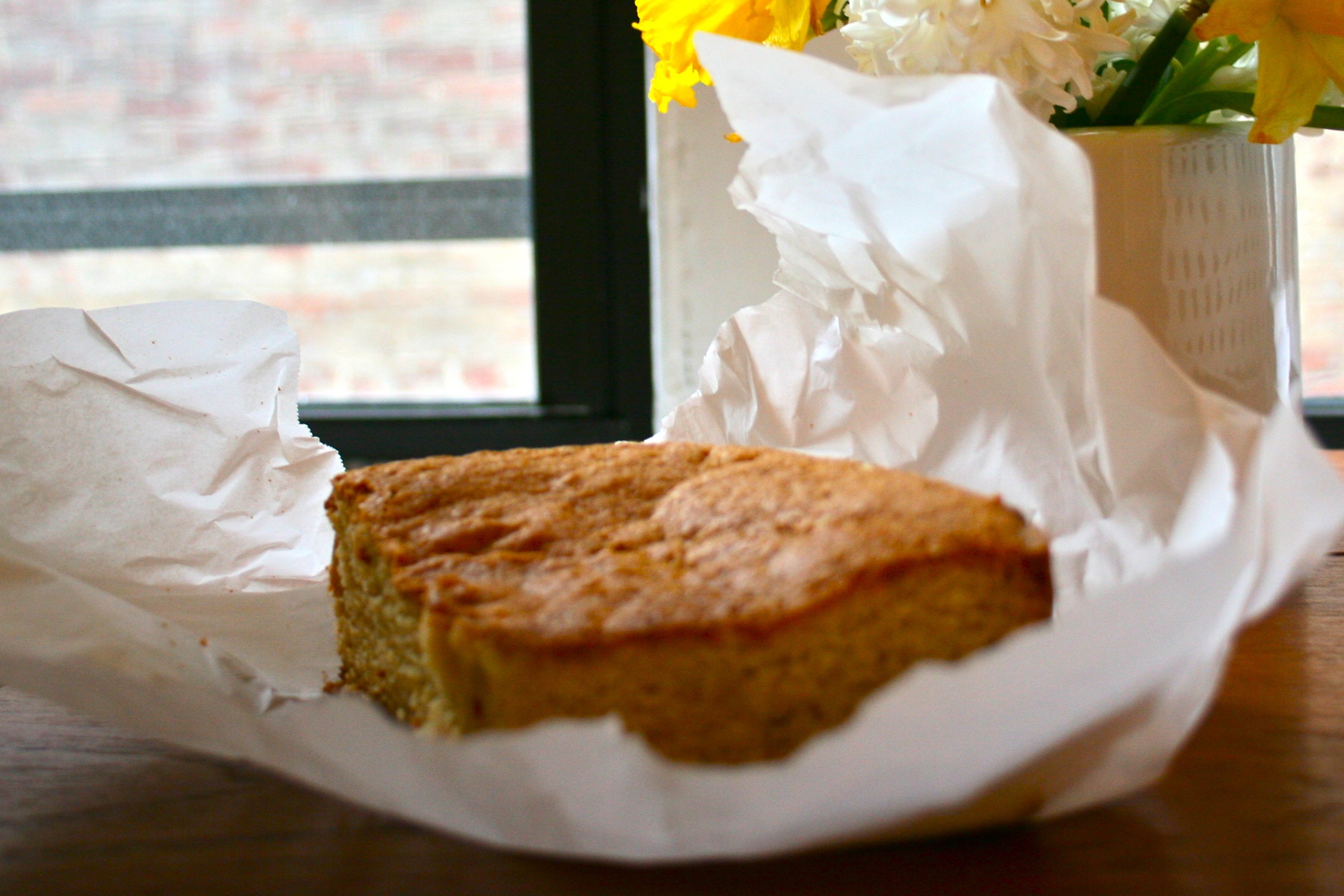 But perhaps my favorite thing about it is how humble it appears. The center invariably falls in and at first sight it looks like a FAIL cake. It doesn’t have frosting, and the color is rather simple. It could be anything, from the outside. I think of it like a little time bomb. I say bye!, and leave them with this innocuous package, maybe they ignore it for a day, and try it later. AND THEN THEY REALIZE. On the inside it’s deeply deeply almondly and with “good crumb” as the bakers say. And so hefty that all slices come out as wedges which is really how one eats cake when in need.

I originally tried it because my Aunt Anne told me about it. The recipe is from The New York Times cookbook edited by Amanda Hesser and it was contributed by Amanda Hesser. She’s the best. And that cookbook is amazing. It’s a culinary history class with a sexy cover. The best thing to do is think of making it a few hours before and pull the butter, eggs and cup of sour cream from the fridge. The batter is mixed in the food processor (a normal mixer would also work). The most tedious part is pulling apart the tube of Almond Paste, but that really only takes 3 minutes. As far as going to the store just for the almond paste, don’t bother. Just make it a habit to always have a tube at the ready in your cupboard. Most groceries stock the Odense brand in the baking aisle, by the spices.

Ok, here it is. Make it yours.

Powdered sugar, for sifting over cake

2.Sift flour and salt into a small bowl. Set aside. In a food processor, beat butter and granulated sugar at high speed until fluffy, about 5 minutes. Add almond paste, a little at a time at medium speed, and beat 8 minutes. Beat in egg yolks, one at a time, and almond extract. Mix sour cream and baking soda and add to butter mixture. Reduce mixer speed to low and gradually add flour mixture, just until blended.

3. Pour batter into prepared pan and spread evenly. Bake about 1 1/4 hours, until top is golden and springs back when lightly pressed and the cake shrinks from sides of the pan. Cool in pan on wire rack. Remove sides of pan and remove paper. Store in a covered tin in or out of the fridge. It improves with age and can be made 1 to 2 weeks ahead. When ready to serve, sift powdered sugar on top and slice like pie.

you can read the original at the New York Times, or buy the book!

19 thoughts on “Almond Cake for the Needy”