I had the nicest Mother’s Day. I wanted to get up before the older girls wake, like Joe and I usually do, and have our cup of coffee outside when everything is still quiet. Yet I am a big believer in the breakfast in bed parade–there’s something formative about it–so I did go back to bed with my kindle so they could still present the breakfast that Joe made. [Scrambled eggs, plus I made this King Arthur cinnamon bun box mix the night before, let it rise overnight outside (crowded refrigerator) and then put it in the oven in the morning when I was down early–delicious.]

At some point in the day I reflected on Mother’s Days of the past when I genuinely believed that I would in some way feel more treasured and special than I did on other days of year. Lauded was probably the word I was looking for. This expectation was entirely the wrong way to approach the day because it disabled me from enjoying the tiny special things that came about, distracted as I was in seeking my Greater Meaning. These days, I’m more interested in whether our daily patterns are working for us and if they aren’t, it’s better to see that and fix it than wait for a special day to declare something isn’t working. 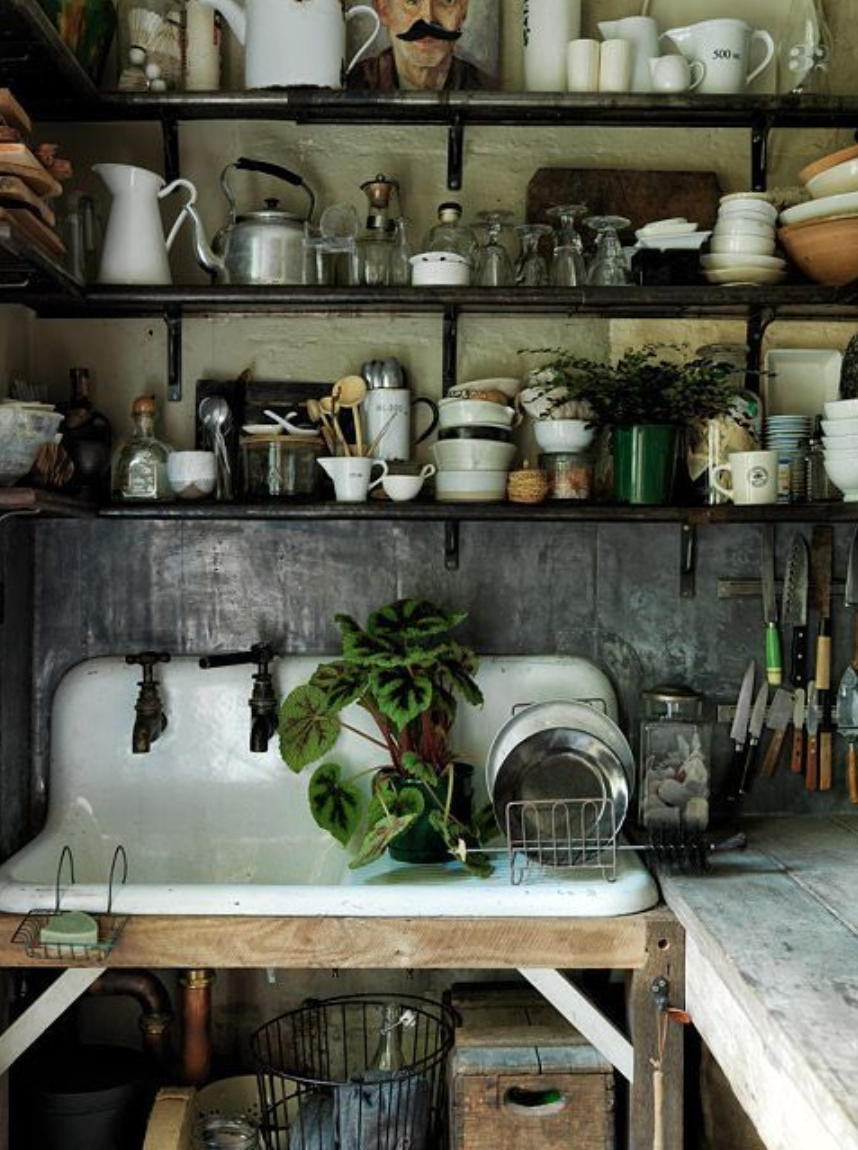 a kitchen I like to think of as at rest. Source long lost and not findable with google images.

And yet the memes about how sleep is all a mother wants still hold of course, and being allowed to sleep in, by the subversion and removal of whatever child typically disrupts the sleep first, is still by far the cheapest luxury available to the partner-giver. Why there is still a child disrupting sleep and why I’m not in a routine of waking up before this child is just one of those things. You move the high water mark and the water rises higher anyway.

For the record, the pursuit of breaks and time to reset is one of those tangible acts with intangible results  that can be very effective at solving many states of child raising fatigue. A couple hours away have allowed me to return to my tasks, just as constantly circular as ever, feeling ready to engage them again. I can still recall the refreshment from when I asked Joe to stay the girls by himself for the whole day, while I went out. I went out to a long lunch by myself and then walked around like a loner and was just silent for hours. Do I like to be silent, as a person? Not really, I’m an extrovert. But it was THE thing I needed at that moment and asking for it and receiving it was transformative before I returned to the week ahead.

Taking breaks is one of the things you hear mentioned frequently by those looking back on their child-raising years. People remark that if they could have taken breaks better, it would likely have been possible for them to enjoy their children more. The idea being that most people absolutely love spending time with their kids and innately long for them to never grow up, but it’s the other things in the room that keep the adults from experiencing that truth on a cell, soul level.

But the questions are: how to decide on the break you need based on the refreshment you seek and how to go about getting it. And beyond this question, there is the sentiment that it is important to share with your children what you are doing for yourself and why you are doing it. Sometimes the postcard of “Mommy is going away for awhile” can look picture perfect, and that’s what we’re avoiding here. It should look ruthless and lonely. As a writer my intentions are also haunted by the vision of presenting children with an inexplicably closed door–this foggy memory seems to crop up often in the recollections of writer’s children.

In parenting over the years I’ve learned it plays better to share your fullest self to them from the beginning–the one that wants a break for fifteen minutes, a nap, some time with her own book, to finish her lunch without getting up for something, who forgets to and then remembers to trim her fingernails, who confesses “I don’t like reading this book aloud,” and “I’m all done playing that game but we can sit next to each other for awhile” right alongside “I can’t wait to read this together,” and “You make the best drawings of bunnies.” It’s like the plot of you can be a complete story to them this way, instead of random chapters left out. This is in the same way that it works best to introduce manners and chores as quickly as their consciousness invites it. I write that as someone who did not do it and had to introduce it later. As we sort out ourselves in the safety of our home, we’re giving them tools/stepping stones/foundation blocks (pick your metaphor!!) to sort themselves.