Upon revisiting Boston for three days I was intrigued to find we had already fallen out of city habits–how to hustle, how to be on time, how to evaluate the speed in which a three year old can scooter across town, how to weigh the pros and cons of a quick dinner down the street. The muscle memory of city life had faded.

The initial reason for the trip was to accompany Joe as he had several consecutive days of work and his company’s holiday party which we always like to be at.

I had announced to the girls that all of the expensive glitzy city traditions we’d once maintained were off this year: the Nutcracker tickets, the restaurant-run gingerbread house afternoon, the fancy hotel teas, and city Santas. It was time for new homemade traditions with new Vermont friends! Wasn’t it?

The seven-year-old looked at me like I had pulled the floor out from under her and asked if we could do a few of them “just one more year.” I realized how reasonable that sounded. And I wondered too what I could possibly have been thinking, having carefully woven a rug of traditions for her and set her upon it year after year; then grandly announcing they were all passé as if I were some Oprah magazine cover for January: new year, new YOU. 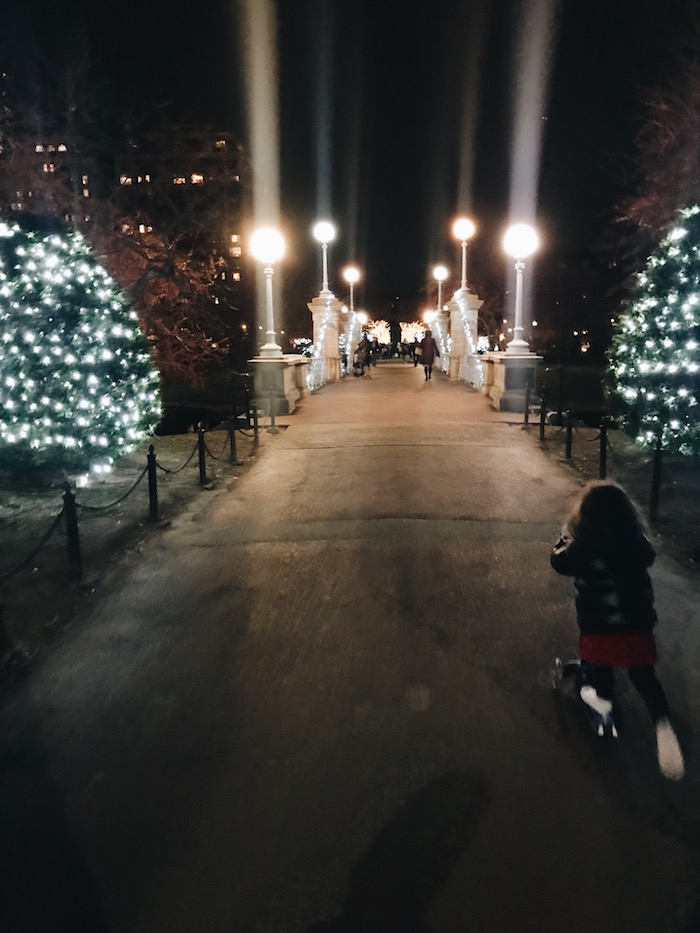 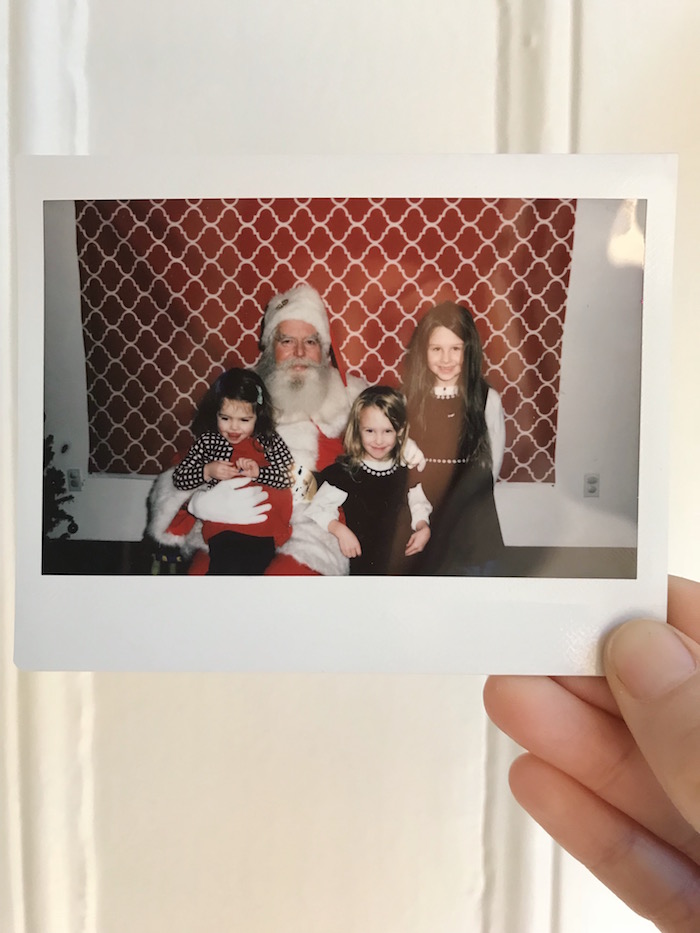 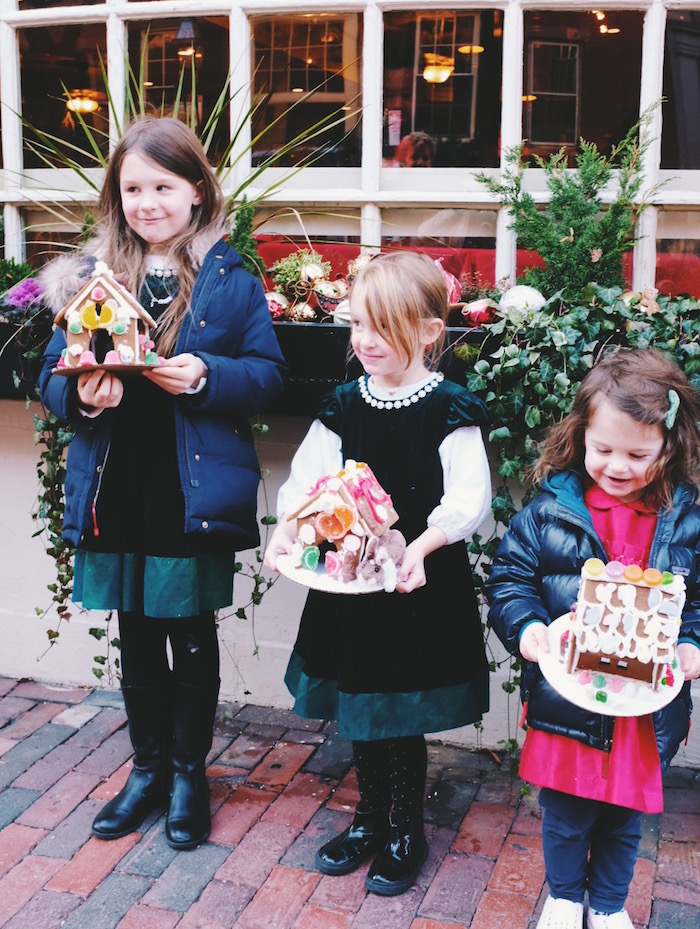 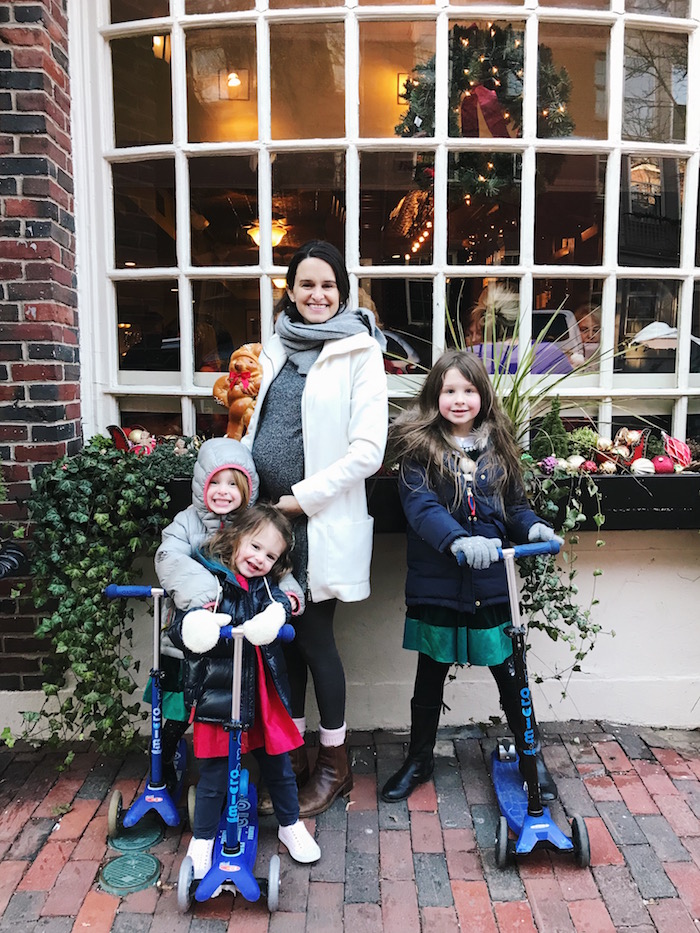 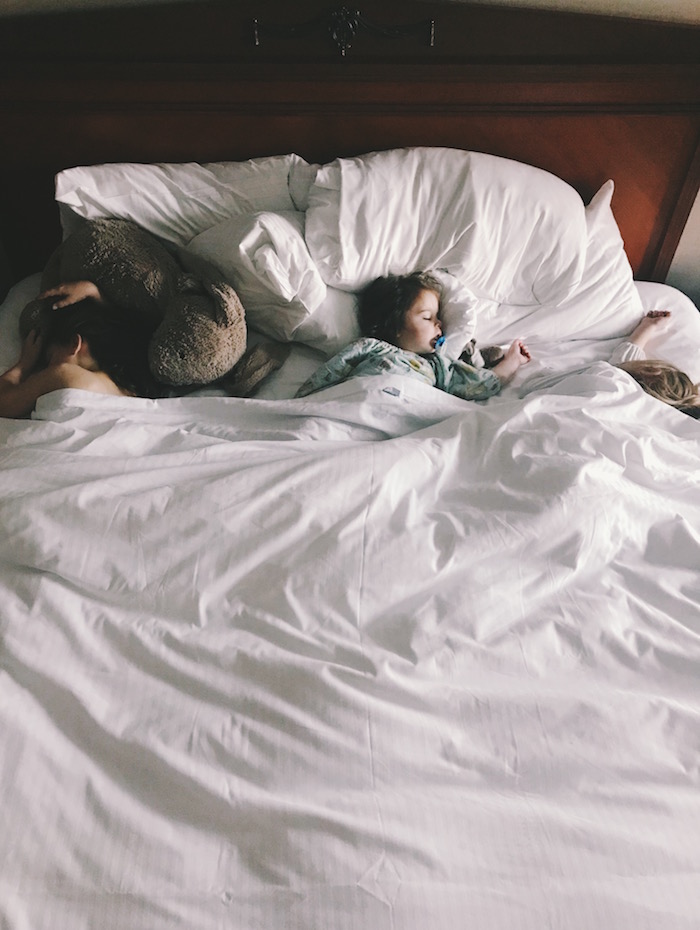 So the three days slowly filled up with favorite things: riding the trains in all the colors: orange, red, and green, ice skating downtown, holiday movies in the hotel room, dinner with old friends, scootering under the light-wrapped branches of the naked trees down Commonwealth Avenue, sharing a sloppy tiny dark hot chocolate at Burdicks, joyfully singing “Dreidel dreidel dreidel, I made it out of clay…” as a giant Menorah lit in the square outside our windows, and yes, even the overpriced gingerbread house tradition.

In which, incidentally, we had the loveliest time building together and trading candy supplies and I couldn’t believe we were at a stage where I could sit quietly with my three daughters for two hours while they carefully applied bright candies to frosting smears and plied each other with their extras.

And for myself, the treat of those moments of wandering on one’s own–for morning breakfast sandwiches from Flour, a breakfast date with a friend at Juliet, a late evening drink with friends at the Bristol lounge–that feel more accessible when one is just up the street.

(The Nutcracker ballet performance stayed off the list, not because of price as you can often get steeply discounted tickets, but because we’ve gone the last few years and last year I sensed that it had ceased to feel as special as one would imagine a child’s attendance at a ballet performance might feel.)

After we left, I realized there was a second important reason for our visit, besides seeing friends and revisiting a few favorite traditions at a time when the city is at its prettiest. The things we did and the places we stopped still meant something to us. We still have mental maps of where things are and how to get there and we felt vague ownership over our experiences had there. But the longer or more frequently we are away, the more those will fade. One cannot hold two existences in hand at the same time. An adult can believe that they will, but really one is being colored with nostalgia while the new one is formed. And for a child, the old one fades to almost black-and-white levels of the distant past. I caught Alma staring at the passerbys and shop windows like she’d never seen a wide avenue before in her life. Is this how quickly it goes? I wondered.